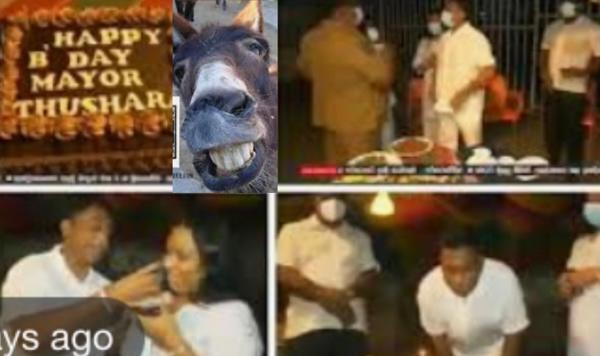 President Gotabhaya Rajapaksa has spoken in a strong tone and ordered the IGP to immediately halt the investigation, the Special Investigations Unit of the Police Headquarters has started on the party organized by the HQI and the Assistant Superintendent of Police, for the birthday of the Mayor of Kurunegala.

The Rajapaksas have always been in power whenever law and order was shamed in Sri Lankan politics. It was under the direct orders of the current President Gotabhaya, that during the Mahinda Rajapaksa regime, he as the country’s defense secretary who was involved in the killings of Lasantha, Thajudeen and Eknaligoda by kidnapping them in white vans and limbs of Poddala Jayanthala’s were broken.

It is the nature of rogue criminals to save their henchmen from murder and show that they are enforcing the law in the country. Confirming this further, IGP Wickremaratne has been ordered not to take any action against Kurunegala Mayor Thushara Sanjeewa or at least not to summon him for an inquiry. Accordingly, the IGP had to immediately stop the investigation carried out by the Special Investigation Unit of the Police.

That is why we say with certainty, that this is law enforcement and that the law of the land does not apply to those who can, but only to those who cannot. We are still puzzled as to whether this is the intelligent change that 69 lakhs sought