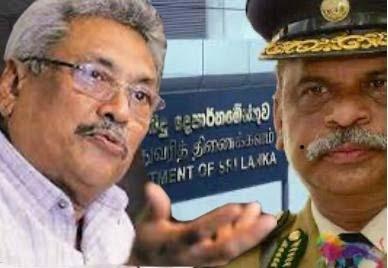 From the time of Ibantatuta, Sri Lanka has been the GATEWAY between Asia and the West. Sri Lanka was on the SILK ROUTE and a center point in international trade. Irrespective of time, the geography of the country has been a key factor for all, local of foreign who wants to have control of this island nation.

Sri Lanka is a SINHALA, THERAWADA BUDDHIST country according to the patriots. Who are these patriots, they are defined as the people who worship the Rajapaksha family including a set of selected Buddhist monks and some clergy men.

Most of the Sri Lankan parliamentarians and politicians are involved in some kind of illegal business and they include Drug Trafficking, brewing of illicit liquor, producing of legal liquor without paying the excise duty, Deforesting, mining sand and soil without a permit, human trafficking and running brothel houses and spas. These are so called business they do amidst taking bribes, extortion and plundering government revenue. We wish to state that both the SLPP and the UNP, the ruling party and the opposition have all these goons in their parties.

Let’s look at some of the examples with evidence.

During the previous MR regime 2005-2015 a raid was conducted on the instructions of STF DIG Lathiff on the residence of Nimal Lansa MP SLPP. Lansa was a beach boy turned politician who is a big time drug dealer. On the day of the raid when the STF entered the residence in search of drugs. Mahinda (then President) flew all the way by helicopter to Negombo a city 20 Km north of Colombo and blocked the raid and protected his man in business.

After the war ended the famous LTTE strongman Kumaran Pathmanadan also known as KP was abducted from Malaysia and brought to Colombo and was kept at secret location, an army camp in Vavuniya to the North of the country. Mahinda and the family took all information from KP the man who had all the LTTE funds in control, made a swap to hand over assets and funds in exchange for his life and this was done smoothly overseas. This money is now parked in Caiman Islands and other tax havens.

LTTE had a major business that brought in much of the revenue and that was the DRUG trade. MR and the family was more interested in this and forced KP to give all leads to the business and he had to reluctantly let loose the information for life. Rajapaksha picked the business and handed it over to DUMINDA SILVA (a man in the death row now for a murder of a parliamentarian) to conduct operation and he was appointed as an observer to the MOD where he had access to the security establishment. With the change of the government in 2015 and the murder Duminda ended up in prison but right now there is much lobbying from many in and out of parliament to get him released and to put him back in the business.

During the YAHAPALANA regime the famous drug dealer WELE SUDA was arrested. He was brought to the Mt Lavinia Police station and statements were recorded. He was charged on many counts and the case went on. Suddenly it was revealed that the CIB record books were missing from the police and a retiring police officer was found guilty and sent home and the case could not proceed.

The story behind says that WELE SUDA has revealed his contacts and a sitting member RAJITHA SENARATHNA MP UNP was the man involved and provided logistics for the transportation of drugs. This can be true because it’s known fact that RAJITHA owns 8 ships whilst the Shipping Corporation Sri Lanka has none. Rajitha is a dentist by profession and how on earth could he have 8 ships even if he removed all the teeth of all the Sri Lankans. Rajitha is another king pin in the drug business and that is why he always likes to be in the side of the government  that is in power than the opposition.

Rohitha Abeygunawardena MP SLPP is another who runs an illegal brewery in Kaluthara South of Colombo, big time and this brewery was also raided during the YAHAPALA regime twice but now continue in full swing with the blessings of the government.

Jhonstan Fernando and Arundika Fernando both ministers of the SLPP government are having legal breweries but do not pay the taxes as they should. The Wayamba Distilleries owned by Jhonstan as sealed in 2017 for non payment of taxes but exonerated by the present government and the business is allowed to continue as usual.

The most beautiful part of the story begins now.

After GOTA assumed office the Sri Lanka Navy apprehended three large consignments of drugs deep down the Indian Ocean in the International waters. Let’ look at the logistics.

When drugs are shipped from the origin the seller, transporter and the buyer are connected via satellite phones. The location coordinates of the vassal carrying the goods are available to all real time. When the goods change hands at high seas or international waters the monies are either physically or electronically exchanged in Singapore, Dubai or any other financial center in the world. In International waters how can the navy pinpoint locate the vassal, when the vassal leaves the port of origin in high seas the name and the color is changed at night whilst in transit. No one can identify the boat with the vast number of fishing boats in sea unless you have the coordinates. Rajapksha got the boats to sea and looted the goods in high seas using the Navy. The present navy commander is the man in charge of human trafficking during the previous Rajapaksha regime.

We write all this to prove a point and that is the Rajapaksha involvement in the drug business.

Recently the famous Drug dealer MAKANDURE MADUSH was assassinated by the police and by no other than former Narcotics head Neomal Rangajeewa. The police drama created for this shooting had many loose ends that any idiot could understand that it was an assassination that was not done on a proper script. Why he was assassinated is to conceal the information that would implicate many politicians in power and opposition. When it comes to business all are together but before the people they are divided what a shame.

The climax of this happened on 6th of December when a team headed by the Excise Chief  Bodaragama arrested 100 kg of HEROIN and 100 kg of ICE with 4 vehicles and suspects at Marawila, North of Colombo.

GOTA was furious over this and has blasted Bodaragama saying “ who told you to go and do the raid you idiot” for interfering and promptly removed him and he was replaced by a lame duck, Inland Revenue Tax Officer called Chandrasiri who has no knowledge on the subject of excise.

This is the shameless criminal, murderer, drug dealer you brought into power in therawada Buddhist country to protect the people, the state and the religion.

Remember this man is going take this county down a road that will take it below Somalia economically and below Colombia in terms of drug trade and related violence.

We also wish to thank the DIASMI and the other basteds who came all the way to vote for this criminal and leave this country in this state. We hope you all who voted will not have a peaceful death, suffer at the end  and go to HELL and meet the Rajapaksha family and enjoy with them for putting the people and the country in the hands of this tyrant.