The deplorable state of the Sri Lankan government in promoting police officers. We wish to bring to the attention of the international authorities of the corruption that takes place in Sri Lanka.
After the famous EASTER ATTACK 52 officers of the Police and the Armed forces directly responsible for the attack  were promoted.
Also Neomal Ranvajeeva the police man responsible for the WALIKADA PRISON DEATHS and for the assassination of a Buddhist monk was promoted by GOTABAYA Nandasena back dated (2020.01.01) yesterday.
Now it is evident that the so called MASTER MIND behind the prison attack and the EASTER ATTACK is no one else but NANDASENA GOTABAYA RAJAPAKSHA.
According to the Establishment Code and the Internal Regulations of the Police Department if a inquiry is pending under A 07 B chapter no promotion can be given. Rangajeeva is promoted despite having a mass murder charge. According to the present promotion Rangajeeva is to get over 1.5 Million in back wages and seniority.
According to the eye witnesses and circumstantial evidence it was proved beyond reasonable doubt that Rangajeeva and Emil Rnajan were directly involved in the murderous act calling prisoners by name and shooting them inside the Prison.
However the order in the case was postponed to the 12 of January for unknown reasons and it is speculated that they will also be exonerated from all changes as it happened in the cases before. 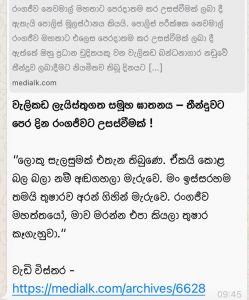 We want to draw the attention of the international authorities, governments and donor institutions to consider this deplorable state of affairs when you take stock to assist the Sri Lankan government.
If the PRESIDENT could call and direct the JUDICIARY on how to give a verdict that is a serious miscarriage of justice. This has jeopardise the safety of many witnesses who gave evidence in this case.
There are 9 CI’s, 47 other officers and 149 other rankers who are suffering for more trivial offences for many years with or without their families.
As we have stated earlier in an article Makandure MADUSH was murdered to conceal the whole Drug (Heroine) business conducted by MP Nimal Lansa with the blessings of the Rajapaksa family. It was well seen when then President Mahinda went to the House of the MP when it was raided by the STF to detect drugs.
WE WISH TO INFORM THE UNITED NATIONS HUMAN RIGHTS COMMISSION, THE DONER COUNTRIES AND THE INTERNATIONAL COMMUNITY THAT THE SRI LANKAN GOVERNMENT WILL USE IT’S POLICE AND THE MILITARY TO CRUSH ANY DEMOCRATIC PROTEST AGAINST THE GOVERNMENT. YOU ARE KINDLY REQUESTED TO BE VIGILANT TO PROTECT THE LIVES OF THE INNESENT CITIZENS OF SRI LANKA FROM A RUTHLESS REGIME THAT IS ALMOST EQUAL TO THAT OF IDI AMIN, ROBERT MUGABE AND GADAFFI.
[wpedon id=”7467″]

APPOINTMENT OF A MURDER AS THE HEAD OF CRIMINAL INVESTIGATION DEPARTMENT OF THE SRI LANKA POLICE.

APPOINTMENT OF A MURDER AS THE HEAD OF CRIMINAL INVESTIGATION DEPARTMENT OF THE SRI LANKA POLICE.

The deplorable state of the Sri Lankan government in promoting police officers.